Brief summary: When the COVID-19 epidemic broke out in Fujian province on September 10th, Jinjiang rapidly mobilized all resources to fight the tough battle. Anti-epidemic person⁃ nel from all departments in Jinjiang kept fighting at the forefront to safeguard lives. After 20-plus days of persistence and struggle, the good news finally came.

At 0:00 on October 4th, with the medium-risk area in Sucuo Chendai cleared, all the lockdown area, control zone and prevention region in Jinjiang were lifted, making Jinjiang a low-risk area thoroughly.

Then, Jinjiang ordered to reopen schools in an orderly way, which brought the sound of reading aloud back to high schools and primary schools. With parks and stadiums open to the public and night markets back in business, the city has gradually returned to the worldly life as usual. The construction sites and workshops are now hives of activity, advancing economic and social development steadily.

Foreigners living in Jinjiang also experienced this unforgettable time. They all gave a thumbs-up to the epidemic prevention in Jinjiang!

On October 9th, our official accounts on WeChat and TikTok released the video which was well received with lots of comments, gaining more than 30,000 views and nearly 3,000 likes so far.

In the video, four foreign friends talked about their own personal experiences of taking nucleic acid tests. Besides placing great expectations on Jinjiang, they also expressed their gratitude through the lens to the people who silently contributForeigners give a thumbs-up to Jinjiang COVID-19 pandemic battle, ed during the epidemic, which gave them a safe and warm feeling in a foreign country. At the end of the video, they thumbed up to the camera and praised Jinjiang!

Yaul Ken Mun from Malaysia:
"This is the strength of China"

Yaul Ken Mun, a Malaysian executive sous chef of Marco Polo Hotel in charge of the hotel's food & beverage operation, is the first foreigner to receive COVID-19 vaccine in Jinjiang. He had a high opinion of Jinjiang's preventive measures against the virus. "Jinjiang is responsive and effective in combating the virus", said Yaul Ken Mun.

According to Yaul Ken Mun, Jinjiang had taken great measures to protect citizens since the outbreak of COVID-19 on September 10th and it took merely 20 days to defeat the epidemic, which provided a sense of security for him, a resident of Jinjiang.

"It's safe to live in Jinjiang with every preventive anti-epidemic measure in place," Yaul Ken Mun recalled. Whenever he went for shopping in malls or markets during the epidemic, the mall workers would check his body temperature and digital health code. The biggest challenge faced by foreigners was that some staff were not familiar with the health codes specific for foreign nationals. Yet, they always tried their best to help foreigners, which impressed Yaul Ken Mun a lot.

The mass nucleic acid test conducted during the epidemic in Jinjiang also left a deep impression on Yaul Ken Mun. "I took the test in Jinjiang Sunshine Time Square. Though there were lots of people that day, the queues were well arranged and the testing went on smoothly." Yaul Ken Mun said that he had been in China for ten years and had a deep affection for the country. He could sense China's spirit of cohesion, solidarity and mutual help, especially during this epidemic. He extolled, "Everyone was devoting his efforts to protect himself and the people around. This is the strength of China."

During his 10-year stay in China, Yaul Ken Mun has been serving in the catering industry in different cities. "Jinjiang is a beautiful place, especially its Wudianshi Traditional Block. I usually go to the coffeehouse in Wudianshi in my spare time and enjoy the leisure with a cup of coffee." 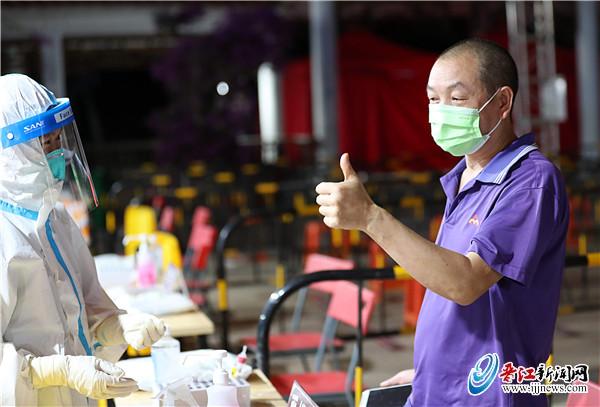 "My love for Jinjiang has become stronger"

Three months ago, Baris Bolat came to Jinjiang from Turkey and became the general manager of a five-star hotel. This 20-plus-day battle against the epidemic has deepened his love for Jinjiang.

According to Bolat, the Jinjiang government responded very quickly after the outbreak in the province. It not only promptly closed gyms, swimming pools and other venues for large gatherings, but also scrupulously checked the hotel. "Every week, relevant departments would come to the hotel for routine inspection three to four times to ensure that the prevention and control measures were in place." Bolat said that it was the government's effective measures that ended the battle in such a short time.

In addition, Bolat acclaimed the full cooperation of Jinjiang citizens in epidemic prevention and control. "Everyone was very cooperative. This is very important." He remarked that his 11 years in China, especially the experience of this anti-epidemic battle, increased his liking for Jinjiang. "Jinjiang owns a developed transportation network and a strong cultural atmosphere. I am really into the culture, history and food of Southern Fujian," Bolat added with a smile.

Samuel and David from Ghana:

"Everything is in order"

Samuel and David from Ghana are brothers. They have been living in Jinjiang for four years and are currently engaged in the foreign trade of footwear. During the epidemic, the brothers observed the government's guidelines and worked from home most of the time. Although the business progressed somewhat slowly, everything was moving forward in an orderly manner, which made them feel safe and secure.

Samuel and David from Ghana are brothers. They have been living in Jinjiang for four years and are currently engaged in the foreign trade of footwear. During the epidemic, the brothers observed the government's guidelines and worked from home most of the time. Although the business progressed somewhat slowly, everything was moving forward in an orderly manner, which made them feel safe and secure.

It's worth mentioning that Samuel has taken his second shot of the COVID-19 vaccine recently. "The staff in the hospital are very patient. I'm very grateful for their help." Samuel said that as a foreign national he had occasional difficulties in registering for the vaccination. The medical staff always explained the situation patiently and had someone assist him. "I feel safe in Jinjiang," Samuel said. "Thanks, Jinjiang government!"